Once again its time for a Readers Digest version of a tramp that I've written up on my Crazy Guy Journals. This time its the Kepler Track, I did this walk in December last year shortly before Sam came over to meet me. This was the third tramp back to back after walking The North West Circuit and The Hump Ridge and by the time I'd finished The Kepler I was ready for a bit of rest and relaxation. Being one of New Zealand's Great Walks I'd booked my spot in the huts six months previously, so after arriving in Te Anau from Tuatapere all I had to do was to lob at the DOC visitor centre and pick up my hut tickets. That done I checked into my hotel for the night, making use of their free wifi to call Sam and let her know that I was still alive, after that I kicked back in my spa and soaked my tired muscles.
20 kilometres                    Luxmore Hut
Yeah I know its not twenty kilometres from the start of the walk to Luxmore Hut but the kilometres figure includes a fairly lengthy afternoon ramble around the hills behind the hut, including an ascent of Mt Luxmore. Anyway I'm getting ahead of myself a bit, first off, after parking the car I had a bit of a climb ahead of me to get to the tops, almost 900 metres of climbing actually. The climb up to Luxmore Hut was surprisingly easy however and by late morning I'd broken out of the Beech Forest and was traversing the alpine grassland towards the huge hut. Once I'd reserved my bunk and had a little lunch I figured that it was time to go exploring seeing that the day was stunning.
So first up I took off to check out Luxmore Caves, a cool grotto on what was by Fiordland standards a hot day. After exploring the cave as far as I could without crawling I returned to the daylight, now I figured that I'd head across country to intercept the track up to Mt Luxmore. Mt Luxmore is a very short side trip off my day two route but with no guarantee of tomorrows weather and today's weather being sublime I figured that I may as well climb it today. The view from the top was extensive with Lake Te Anau visible below and Lake Manapouri to be glimpsed to the south. Returning to Luxmore Hut in the late afternoon I found the hut full, I was surrounded by a group of girls from Timaru and as it turned out, I'd spend the next four nights with these great teenagers.
17 kilometres                      Iris Burn Hut                               37 kilometres total.
Day two on the Kepler was one out of the box, cobalt blue skies and a light breeze greeted me for what was the best part of a days ridge walking. My limited vocabulary can't do justice to today's tramp, with extensive views, and in a lot of cases 360 degree views it was another one of those days that I just try and sear into my memory. With my polariser set on nuclear and my memory card melting down I slowly made my way across to Hanging Valley Shelter. Once at Hanging Valley Shelter I stopped for a drink and a bite to eat, from here the Kepler changes direction and descends another ridge down to the Iris Burn.
The ridge down to Iris Burn is even more acute than the route across the tops and I savoured every view. Eventually, after one last lookout the Kepler starts to zig zag down the side of the ridge and drops into the Beech Forest on its long descent down to Iris Burn Hut. The descent is punctuated by a stop at a perfectly placed bench seat which gave me extensive views over the Iris Burn Valley and also made me realise that I still had a while to go before I got to the river. Arriving at Iris Burn Hut I went through my usual routine, grabbed a bunk and had a late lunch. After digesting my salami and cheese my thoughts turned to a swim, first up I went and checked out the Iris Burn near the hut, finding a crystal clear water hole I stripped off and went for a skinny dip, I may have had colder swims but I really can't remember when! After thawing in the sun for awhile I wondered up to Iris Burn Falls in my hiking havaianas, stripping down to my shorts I figured that I'd attempt to swim to the base of the falls, we'll at least this time I got half a dozen strokes in before retreating to dry land, it was slightly warmer than near the hut but still bloody cold. Once again that night I passed my time reading and curing the ill's of the world with my friends from Timaru. 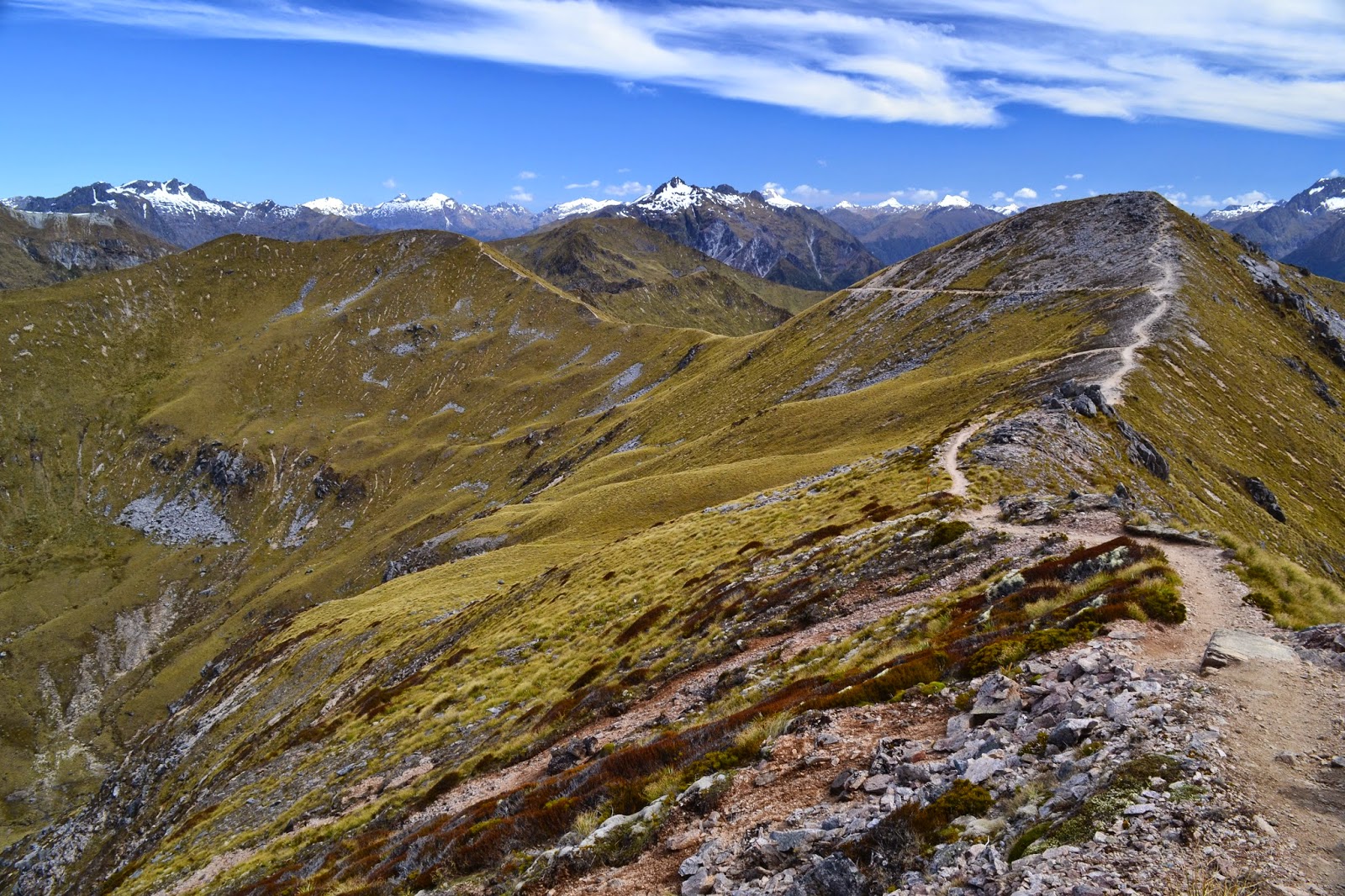 16 kilometres                   Moturau Hut                                   53 kilometre total.
Day three on the Kepler and the weather was still stunning, blue skies and sun, in fact sunburn was more of a problem than anything else, well except for maybe the sandflies. Todays walk was a forest walk, I basically followed the Iris Burn downstream until it emptied in Lake Manapouri, on the way the tramp was enlivened by crossing a large open section called the Big Slip where a massive landslide had wiped out all the large trees allowing extensive views up and down the valley. After crossing numerous tributaries of the Iris Burn I eventually saw Lake Manapouri appear through the trees and, after a short side trip I popped out on the shore of the lake on a snow white sandy beach that wouldn't of been out of place on a tropical island. From here it was a short tramp above the shore of Lake Manapouri to Moturau Hut.
After the usual routine at the hut I headed down to the beach on the shore of Lake Manapouri where I spent the rest of the afternoon swimming and laying in the sun reading, it wasn't the heat that forced me back into the water though it was the ferocious sandflies, as I dried in the sun between swims they attacked, the only solution was to stay wet or smother myself in toxic waste, other wise known as 'bushmans' insect repellent. Returning to the hut I was drafted by the warden to help her fix the plumbing as the hut had no water, not actually being a plumber I was happy when the join I put in the pipe didn't leak and the hut once again had water. The warden was happy too, rewarding me with some 'minties' for my effort. After having dinner with the Timaru girls for the last time I headed down to the lake shore for one last swim to wash of any insect repellent and at the same time witnessed my best sunset yet on this trip to New Zealand.
16 kilometres                    Lake Te Anau Control Gates     69 kilometres total.
Once again blue skies and sun greeted me for my last day on The Kepler. Today was once again primarily a forest walk, first up around the shores of Lake Manapouri then north to Lake Te Anau along the huge Waiau River. The first objective after leaving was Amoeboid Mire, a large swampy area that The Kepler skirts around mostly, a short duck boarded side trip led out into the mire. From the lookout at the end of the side trip I was greeted with perfect reflections in the still water, with the mist slowly lifting and a duck floating on the water it was an evocative scene.
Returning to my pack I put my head down and ticked off the kilometres back to the car, stopping here and there to take in the views over the Waiau River or of the magnificent forest I was none the less back at the Lake Te Anua Control Gates before lunch time. Kicking off my boots for the last time for awhile I headed into Te Anau to grab some lunch before pointing the car towards Queenstown where I'd enjoy a few days rest before Sam turned up and we headed out on the Milford Track. After checking into my hotel and having a shower I wondered down to Fergburger to refill my body with saturated fat and once again bumped into my mates, the Timaru girls who had stopped off for a feed on their journey home,
The Dirt.
I tramped 69 kilometres on The Kepler Track including side trips, the tramp is fairly easy except for two things.The first issue is the need to ascend almost 900 metres on day 1, while the track is very well graded you still have to climb it. The second is the exposed country the trail crosses for the majority of day two, I had the right gear and had perfect weather but if the weather turned this section of track could get very serious very quickly. The huts on The Kepler are huge,with running water, flushing toilets, mattresses, gas rings, and more, they are very well equipped, take very light weight sleeping bag in summer though as I found them very hot a stuffy in the admittedly unusually warm weather. You need to book a spot on The Kepler through DOC, and you need to book early!
Finally if you want to check out a lot more photos and some more waffle this is the link to my Crazy Guy Journal.

I mentioned in my last post that I was heading out and doing a snow walk next and indeed that's how it turned out. The weather in Me...