Its been awhile since I've actually done a walk in Victoria, I had a dose of man flu that took a bit longer to shake than I envisaged, we took a trip to Adelaide and basically I've been a bit lazy so haven't got around to heading out into the cold for a stroll. I had grand plans this past Saturday though, I was going to head off well before sun up and revisit a walk up at Eildon, yeah that's what I was gunna do...... When I heard the paper thump against the garage door I was up and out of bed, grabbing the paper things quickly unravelled from there, first up I turned the heater on, second I turned on the cricket, and thirdly I cranked up the coffee machine, I wasn't going anywhere in a hurry! By 11am I'd read 'The Age', watched a whole day of cricket (although some of it was on fast forward, which quite a few of my friends would say could only improve the game) and had my caffeine reserves topped up, time to go for a walk.
Consulting my library of guide books I settled on a walk called Johns Hill written up by John Chapman, this walk had two advantages in my eyes, one, it was within an hours drive from home and two, it was a walk that I hadn't done before. So after a quick stop at the local bakery to top up my fat reserves I headed up to the small town of Clematis near Belgrave, arriving around 1 pm, hey that's a pretty early start for me. Pulling on my boots and getting a start photo in the car park I set off on the first section of the walk.
After about 30 seconds up the dirt Jackson Hill Road I was already pretty well rooted, maybe all that lack of walking wasn't actually like an athlete tapering, who'd have thought? Luckily there was plenty to stop and photograph, the blue sky and many shades of green allowed me to get a bit of use out of my polariser for a change. The walk started off through a semi rural landscape with plenty of big blocks and flash houses complete with introduced vegetation, after climbing Jackson Road I turned to the east and followed Ridge Road out to Johns Hill. From the look out at Johns Hill I could see Port Phillip Bay in the distance, Cardinia Reservoir in the middle distance to the south, to the north I could see Mt Donna Buang and Silvan Dam. 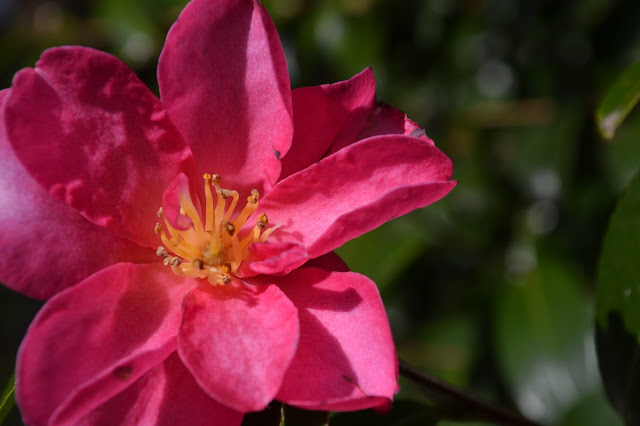 Leaving the lookout I plunged down the end of the ridge to the Avard picnic ground and Menzies Creek, the walk down was fairly slippery but I was reward by a beautiful section of track along the lush fern filled Menzies Creek. There was also some giant eucalyptus along this section that must be hundreds of years old, one tree in particular looked at least three metres across at its base, I took a photo but its pretty crap so you'll have to go and check it out for yourself but it was pretty impressive, actually looking through my photo's at the end of the walk I seem to be developing a bit of a tree fetish, something some of my more conservative friends have been telling me for years.
After following Menzies Creek for a little while I started to climb up a long section of stairs back into some more urbanised land at Telopea Road. Now I had a pleasant stroll in the late afternoon sun through the back streets of Clematis, at one stage some smoke from a burn off provided a bit of a photo opportunity and added a bit of interest, the winding road also allowed me to play around a bit with my camera. Meeting up with the Puffing Billy Tourist Railway I now more or less followed the line for awhile, being lucky enough to have the little steam train chug past me at one stage.
The rest of the walk had me following a series of quiet semi rural roads, this might sound a bit boring but its actually not too bad. Its quite interesting checking out all the houses and gardens as well as the rolling hills and green rural land. After one last climb along School Road I made the quick descent down to the ute at Hermons Saddle Reserve, relieved again to find the ute still there at the end of a walk.
The Dirt.
I used John Chapman's Notes from his book 'Day Walks in Victoria'. its walk # 26 in the book. According to my GPS I walked 13.4 kilometres and climbed 387 metres over around three and a half hours.
The walk was either on fairly good, if somewhat muddy, walking tracks or along quiet country roads or verges. I'd rate this walk as a medium walk which would probably be at its best in late Autumn with all the deciduous non native trees in the gardens. 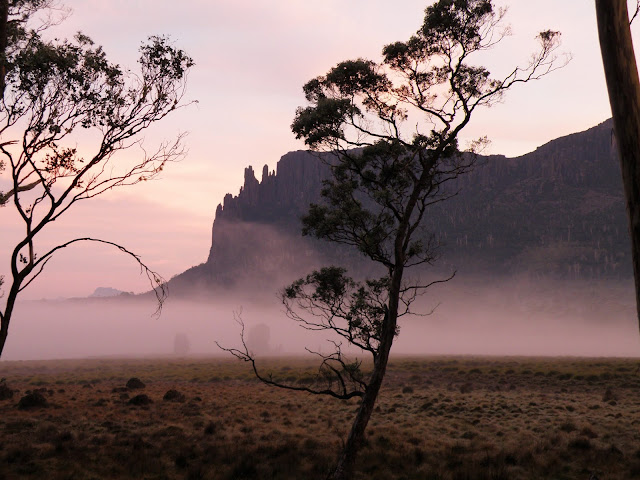